The client opens the file it wishes to read by calling open() on the FileSystem object, which for HDFS is an instance of DistributedFileSystem (step 1 in Figure 3-2).

DistributedFileSystem calls the namenode, using remote procedure calls (RPCs), to determine the locations of the first few blocks in the file (step 2). For each block, the namenode returns the addresses of the datanodes that have a copy of that block.

Furthermore, the datanodes are sorted according to their proximity to the client (according to the topology of the cluster’s network;). If the client is itself a datanode (in the case of a MapReduce task, for instance), the client will read from the local datanode if that datanode hosts a copy of the block.

The DistributedFileSystem returns an FSDataInputStream (an input stream that supports file seeks) to the client for it to read data from. FSDataInputStream in turn wraps a DFSInputStream, which manages the datanode and namenode I/O.

The client then calls read() on the stream (step 3). DFSInputStream, which has stored the datanode addresses for the first few blocks in the file, then connects to the first (closest) datanode for the first block in the file. Data is streamed from the datanode back to the client, which calls read() repeatedly on the stream (step 4). When the end of the block is reached, DFSInputStream will close the connection to the datanode, then find the best datanode for the next block (step 5). This happens transparently to the client, which from its point of view is just reading a continuous stream.

Blocks are read in order, with the DFSInputStream opening new connections to datanodes as the client reads through the stream. It will also call the namenode to retrieve the datanode locations for the next batch of blocks as needed. When the client has finished reading, it calls close() on the FSDataInputStream (step 6).

During reading, if the DFSInputStream encounters an error while communicating with a datanode, it will try the next closest one for that block. It will also remember datanodes that have failed so that it doesn’t needlessly retry them for later blocks. The DFSInputStream also verifies checksums for the data transferred to it from the datanode.

One important aspect of this design is that the client contacts datanodes directly to retrieve data and is guided by the namenode to the best datanode for each block. This design allows HDFS to scale to a large number of concurrent clients because the data traffic is spread across all the datanodes in the cluster. Meanwhile, the namenode merely has to service block location requests (which it stores in memory, making them very efficient) and does not, for example, serve data, which would quickly become a bottleneck as the number of clients grew. 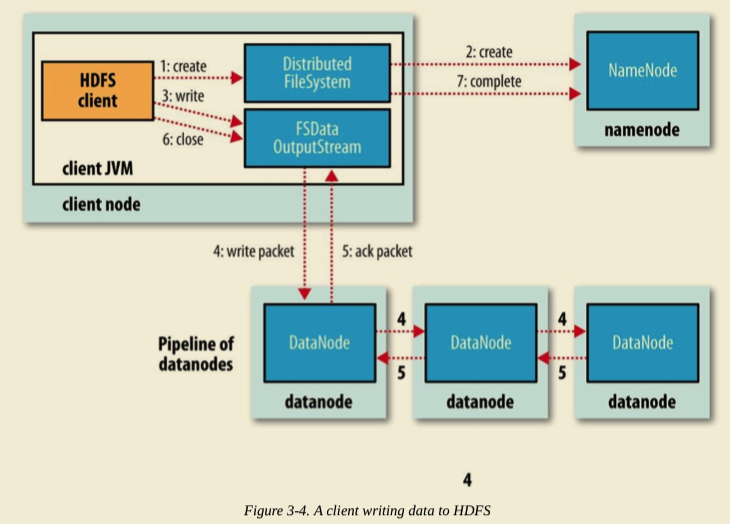 The client creates the file by calling create() on DistributedFileSystem (step 1 in Figure 3-4).

DistributedFileSystem makes an RPC call to the namenode to create a new file in the filesystem’s namespace, with no blocks associated with it (step 2). The namenode performs various checks to make sure the file doesn’t already exist and that the client has the right permissions to create the file. If these checks pass, the namenode makes a record of the new file; otherwise, file creation fails and the client is thrown an IOException. The DistributedFileSystem returns an FSDataOutputStream for the client to start writing data to. Just as in the read case, FSDataOutputStream wraps a DFSOutputStream, which handles communication with the datanodes and namenode.

If any datanode fails while data is being written to it, then the following actions are taken, which are transparent to the client writing the data. First, the pipeline is closed, and any packets in the ack queue are added to the front of the data queue so that datanodes that are downstream from the failed node will not miss any packets. The current block on the good datanodes is given a new identity, which is communicated to the namenode, so that the partial block on the failed datanode will be deleted if the failed datanode recovers later on.

The failed datanode is removed from the pipeline, and a new pipeline is constructed from the two good datanodes. The remainder of the block’s data is written to the good datanodes in the pipeline. The namenode notices that the block is under-replicated, and it arranges for a further replica to be created on another node. Subsequent blocks are then treated as normal.

When the client has finished writing data, it calls close() on the stream (step 6). This action flushes all the remaining packets to the datanode pipeline and waits for acknowledgments before contacting the namenode to signal that the file is complete (step 7). The namenode already knows which blocks the file is made up of (because DataStreamer asks for block allocations), so it only has to wait for blocks to be minimally replicated before returning successfully.